Today we welcome the always funtabulous Meredith S Wood, young adult author of Panthan's Crucible and the upcoming Panthan's Abyss, among other forthcoming books of awesomeness. If you aren't familiar with Panthan's Crucible, it takes you into a unique world of familiar and not-so-familiar creatures, including the panthans - "they're like angels...but bloodthirsty." 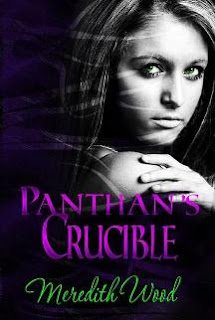 In a world where humans are no longer the hunters, but now the hunted, Laura Morgan discovers she’s a pawn between two of its deadliest creatures. She can run. She can hide. But what happens when she learns she’s not even human and could be the deadliest creature of them all?

Seventeen-year-old Grayson of Lorne wants to be an Eminent since they are the most powerful of panthan warriors. Grayson’s uncle promises he’ll be made one if he’ll help Laura. To him this female flies such a huge freak flag he's not sure it's possible.

What Grayson can't get through his thick head is he's annoying and pushy and stuck on himself. And yeah, maybe he's a tiny bit of hotness. What neither can understand is that some bonds form no matter how much you don't want them—especially ancient ones that only occur every seven thousand years.

About the book and writing...

Me: If you could have any band or musician create a soundtrack for Panthan’s Crucible, who would it be?

MW: Trevor Morris.  There's simply no comparison for me.
Me: Um...I totally had to look that up. Readers - he did music for The Pillars of the Earth, The Tudors (Showtime) and video games. Cool stuff and I can see how it would be good for PC!

Anyway...back to the interview. In PC, Laura has this odd habit of counting and freaks herself out if the number isn't "right" or "good." How did you come up with this habit? Is there ever an explanation for why some numbers are good and others are bad?

MW: You’re so going to regret going here. ;-)
Laura's counting and number habits began with a couple questions.  I knew she would have to be damaged in some way.  No way around it.  But how would I take this girl from a world Panthans tore apart and make her capable of not just fighting for the things she believed in but doing it side by side with another Panthan?  Furthermore, how was she going to be able to adapt to becoming one of the creatures she feared the most?  My first answer: She would need a coping tool.  This led to looking for something not too destructive but also capable of making her feel like she had control.  Some teens turn to eating disorders to solve this dilemma and some turn to cutting.  I didn’t want Laura to have either of these problems because it would make it harder for her to adapt to her new life.  I also didn’t believe this was the book to tackle these subjects.
At this point, my mind was like a carousel that never stopped spinning.  The worst of it was I couldn’t decide which horse I wanted to ride on so I kept jumping from one to another.  While making a numbered list of possible coping tools I wrote “OCD” and immediately something clicked in my brain.  Not wanting to go all the way with the OCD, the number thing gave me the boost I needed.
I think I only wrote why the number twelve was a bad number for Laura.  The rest I left up to the reader’s assumption.  But, poor you,  you're about to find out why I did this. lol
Since she counted everything the events of her days equated to one of her good numbers or one of her bad numbers.
Multiples of three were safe unless part of an equation equaling twelve, her ultimate bad number.  Without safe numbers, she would never have an escape hatch that would allow her to adapt and move forward in her life.  I chose the number three because it represented individuality to me.  Any number I chose from an even set would always present a perfect conformity to its pattern whereas an odd number would always have some part of it that stood out from the rest.  The number three was a personal choice I made for Laura, sort of a sign from me to her saying I believed she had the ability to take the path that stood out from the rest.
For the most part, how she determined whether her latest equation would equal a “safe” number or a “bad” one depended on whether she made the subconscious decision to cope with her current problem.  If she decided to cope with the problem, she’d find a way for her latest equation to equal a multiple of three and she’d move forward.  If her current problem hurt her in any way, her equation would equal a bad number.  This process guaranteed a place to lock down her pain and she would avoid that number from then on.  If she were unable to form the equation she wanted, she would choose a new good number or a new bad number.
This part of her character was a challenge for me in so many ways.  To begin with, I suck at math.  Totally.  Keeping up with the good and bad numbers was a recipe for some major stress headaches.
However, it did give Laura the ability to appear damaged, as would be expected, while at the same time making her functional for her role in Panthan's Crucible.
Me: Yeah, my head's spinning. Have you ever made yourself cry while writing a scene? Laugh out loud?

MW: No, I haven't.  I've cried while planning scenes but when it comes to writing them I detach myself.  It's a strange process.  I become so engrossed in feeling the pain from my character's pov that my own emotions are shoved to the side.  If that makes any sense.
But I battled my own blood phobia while writing Panthan's Crucible.  The scene where V draws the blood from Laura was the hardest scene I’ve ever written.  While doing the research I would read for a few minutes, feel lightheaded and have to lie down, then go back and read some more.  Writing the scene went the same way.
Laughing out loud is another story though.  Some of V's scenes make me giggle every time I read them.  I guess that makes it hard for the readers who want to see him get his just desserts.  He makes me laugh, which makes me adore him.  Then again, so many things he does don't make it into my books. Matter of fact, I like him so much he's going to get a story all to himself explaining how he got where he is today and what made him the Panthan that he is.
Me: Oooh! Can't wait! I am so involved in my writing, too, but I do cry...because that's what Alexis is doing! LOL OK, what is the craziest or weirdest thing you’ve ever had to research for your writing? Anything that would lift a collective eyebrow by the FBI or Homeland Security?

MW: The craziest thing I've ever researched wasn't really that crazy. The crazy was in what I found.  I needed to know how certain animals mated. What I learned was that honey bees mate for life.  Well, on the male's side at least. Once the male ejaculates he explodes. Yeah. Really. Talk about an explosive sexual experience, huh?  Of course, the female doesn't have to worry about catching any STDs from her partner since it's obvious she'll be his first.
Me: ROFL! We learn the strangest things.

Me: When you were a kid, what did you really want to be when you grew up? How did that turn out?

MW: As a wee kid I wanted to be a rock star or a gold medal winning gymnast. By around eleven, I settled on two things. I never doubted that I could do them both at the same time: A marine biologist and a writer.  I'm not exactly sure when the dream to become a marine biologist faded because I can remember still wanting to pursue it when I was fourteen.  My memories of being sixteen don't have that wish in them anymore so I'm guessing boys screwed the dream up.  They're probably what pushed my writing dream forward though. lol I married young and for several years learning how to be a wife and mom took up most of my energy. At some point I realized I was no longer an individual, but rather an extension of my family.  That's when I started working on fiction writing, which was a road that changed my life and taught me how to fight for what I want at all costs.
Me: There's such a story in the rock star-gymnast-writer-mom! Speaking of stories and books... If you were stranded on a desert island, what’s the one book you must have with you?

MW: A Sookie Stackhouse book.  Charlaine writes with the same love for the South that I have. When I read those books I feel like I'm home--dark, deadly creatures of the night included. ;-)
Me: If I came to your house for dinner, what would you make me?

MW: Probably Manicotti. Yumz!
Me: If you came to my house for dinner, what should I make for you?

Coffee or soda/pop? (And what do you call it?) I usually limit myself to one cup of coffee per day. The rest of the day I choose soda, tea, or water.

Wine or beer or something harder? Chilled Tanqueray or an Amaretto Sour.

City or country or suburbs? Country.

Water-skiing or snow-skiing? Water skiing all the way.

Rome, Tokyo or the Australian Outback? Rome. While Australia's pretty, it's too hot for me.

Oh, yeah! So, after we devour our steak and pasta dinner, Meredith and I will be hanging out, watching DVDs with popcorn and brownies (gotta have chocolate!). But later you can stalk her all over:

And to buy Panthan's Crucible click here. Do you dare to walk among the panthans?
Posted by Kristie Cook at 3:19 PM